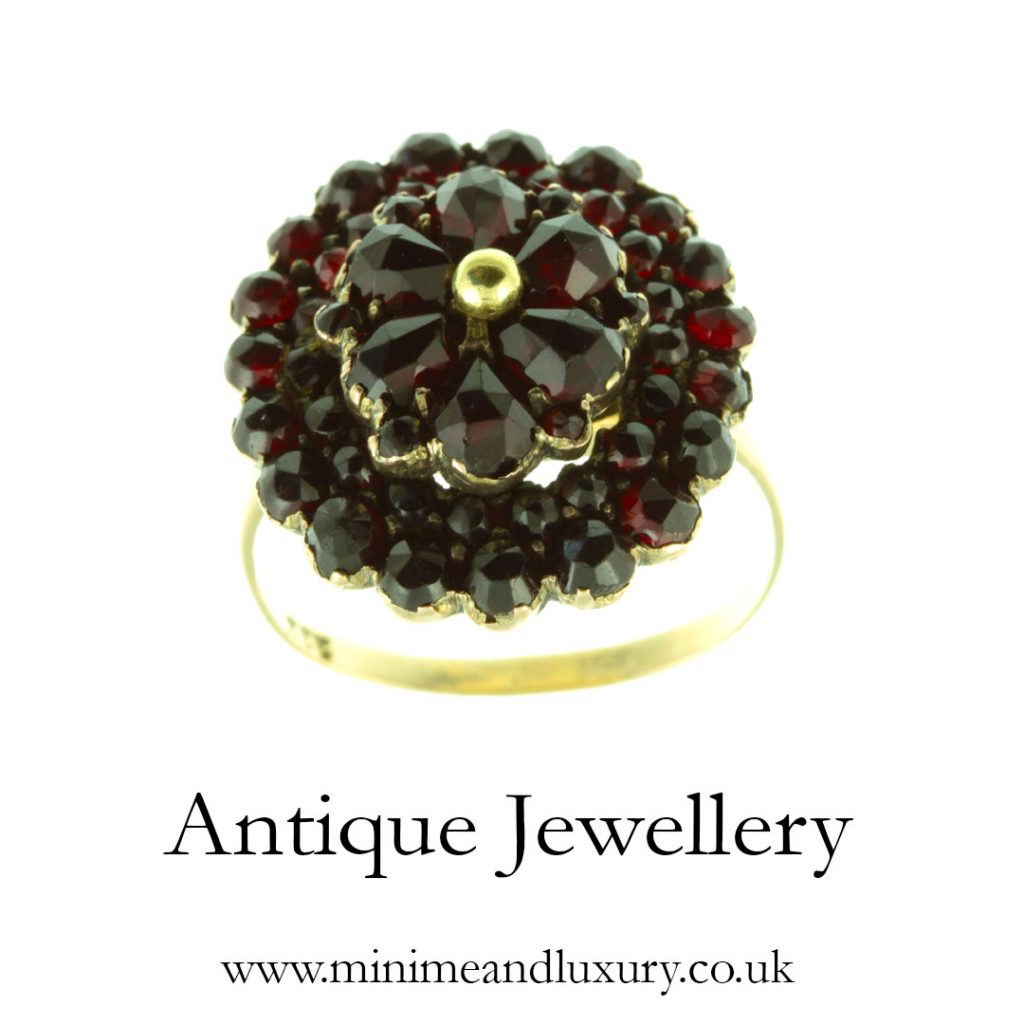 I love antique jewellery and started to collect it about five years ago. In jewellery trade terms ‘antique’ describes a piece that was made at least 100 years ago. That means that any jewellery made around 1920 or before is technically antique. Jewellery and fashion across the ‘antique’ eras include: Georgian, Victorian, Edwardian and Art Nouveau. The colours of the gemstones in antique jewellery are amazing, and there is a rainbow of colours for you to choose from:

Black – Black Tourmaline is the most commonly known black gemstone although there are other well-known varieties such as Obsidian, Black Onyx, Tahitian Pearls, Black Opal, and Schorl Tourmaline. The variety of antique jewellery is main thing that really attracts me, the different types of necklaces for example are vast. Lockets: A locket is a type of pendant that opens to reveal a space used for storing a photograph or other small item such as a lock of hair. Lockets are usually given to loved ones on holidays such as Valentine’s Day and occasions such as christenings, weddings and, most noticeably during the Victorian Age, funerals. Historically, they often opened to reveal a portrait miniature.

Lockets are generally worn on chains around the neck and often hold a photo of the person who gave the locket, or they could form part of a charm bracelet. They come in many shapes such as ovals, hearts and circles and are usually made of precious metals such as gold or silver befitting their status as decorative jewellery. Lockets usually hold only one or two photographs, but some specially made lockets can hold up to eight. Some lockets have been fashioned as ‘spinner’ lockets, where the bail that attaches to the necklace chain is attached but not fixed to the locket itself which is free to spin. This was a common style in the Victorian Age. Around 1860 memento lockets started to replace mourning rings as the preferred style of mourning jewellery.

Keepsake lockets can also be made with a glass pane at the front so that what is inside can be seen without opening the locket. Such lockets are generally used for items like locks of hair which could fall out and become lost if the locket were repeatedly opened, whereas photograph lockets are generally enclosed on all sides and the photographs are secured by pieces of clear plastic.

Another kind of locket still made was in a filigree style with a small cushion in the centre to which a few drops of perfume should be added. Perfume lockets were popular in eras when personal hygiene was restricted, and sweet-smelling perfume was used to mask the odour of a person or their companions.

Have a look at the beautiful range of lockets at carusjewellary.com

Pendants: A pendant is a loose-hanging piece of jewellery, generally attached by a small loop to a necklace, which may be known as a “pendant necklace”. A pendant earring is an earring with a piece hanging down. Its name stems from the Latin word pendere and Old French word pendr, both of which translate to “to hang down”. In modern French, pendant is the gerund form of pendre (” to hang”) and also means “during.” The extent to which the design of a pendant can be incorporated into an overall necklace makes it not always accurate to treat them as separate items.

In some cases, though, the separation between necklace and pendant is far clearer.

Fobs: A fob is either a chain or ribbon (and the ornamental piece joining it) that is attached to the pocket watch and the word fob dates back as far as 1888

I would highly recommend researching antique jewellery, not only is it beautiful and unique. You can try and trace the history of what you are wearing and it can be fascinating.